Ben Hanlin has shared the dread he felt as his baby daughter, Delilah, fought for her life against sepsis.

The Dancing On Ice star, 33, told Loose Women how he rushed home to find the seven-month-old's hands and feet going blue as an ambulance arrived to take her to hospital.

After becoming stable following a two-hour scare, and later being released, Ben wanted to speak out and urge other parents to act quickly if they suspect their child may have the infection.

'I was about to go on stage, I got a phone call from my wife, Briony, saying she had called an ambulance. I was like, "Right, I'm coming home",' the magician said on the programme.

'They [paramedics] took one look at her, with her mottled skin and 103-degree temperature. She was struggling to breathe, her hands and feet were turning blue.

The performer, who shares two children with wife Briony, added that Delilah was struggling to breathe, and was told his daughter had suspected sepsis.

Praising the doctors, he continued: 'They gave her amazing attention. 'Within two hours they got her stable, it was a long two hours.

'We were very, very, very lucky. We were one of the lucky ones and got her there [to hospital] quickly.

Delilah was hospitalised for six days before being released back to her parents.

'Dancing On Ice is live every Sunday, and this was all happening on the Thursday, I stayed in the hospital and I woke up the next day and she was stable, and my wife said there's nothing you can do here so go to training.

'I went and I wasn't really with it... I had to go onto the show and be all happy. 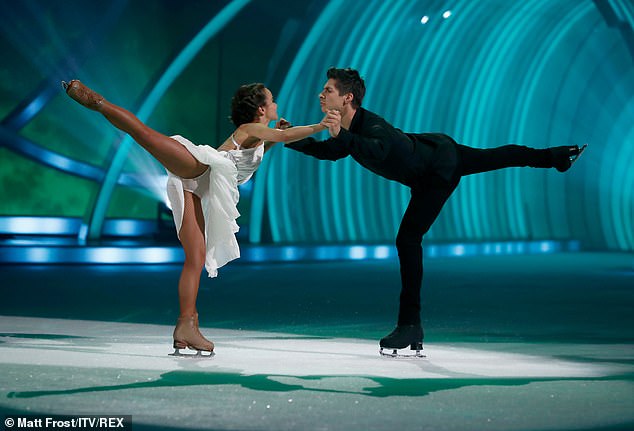 Back to work: 'Dancing On Ice is live every Sunday, and this was all happening on the Thursday, I stayed in the hospital and I woke up the next day and she was stable, and my wife said there's nothing you can do here so go to training'

Ben also admitted that he knew practically 'zero' about the potentially deadly condition which he had to google to discover it is a form of blood poisoning that occurs when the body attacks its own tissues and organs following an infection.

It can initially look like the flu or a chest infection, with symptoms including fast breathing, fits or convulsions, and a rash that doesn't fade when you press it.

Ben said that he had decided to speak out about Delilah's health issues in a bid to raise awareness over the condition, as well as the symptoms.

'It was terrifying. She was hooked up to tubes and put on a drip which is something no parent ever wants to see. The whole thing was a huge shock,' he told the Sun.

Ben returned to the competition last Sunday, after his youngest child was released from the hospital.

Get the app for a better experience!

Or on the web